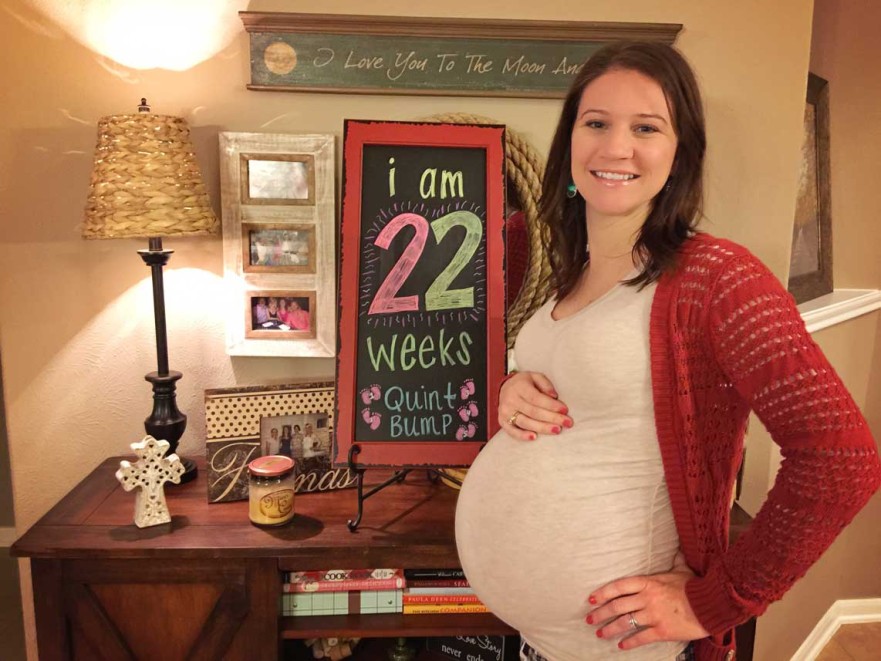 It has taken me a few days to actually get the weekly pic taken because I haven’t been feeling well. Mostly because of our ‘awesome’ Houston weather (it was 75 the past weekend and now its in the 30s)…so I have major sinus pressure and can’t breathe for anything. I even resorted to a Neti Pot AND NO THANK YOU!!!! I about threw up the first time I tried it. UGHHH!!!! I hated every minute of it AND after doing it 4 times in one day, It did ABSOLUTELY NOTHING for me!  I have been sneezing too and let me tell you…NOT FUN when there are FIVE babies in your belly. It hurts so bad to sneeze! And you know when you sneeze once, you’re gonna sneeze again….HATE IT, lol.

I officially don’t think I like sitting anymore…my tail bone..holy cow!…it’s hurting big time. Plus sitting up just really hurts my belly in general. Can’t cross my legs when sitting so I’m super ‘lady like’ at this stage. When company comes over, I’m usually propped up on the couch feeling like I’m laying out on my side posing for a photo shoot…in pjs, wait…lounging clothes.. of course 😉

I think the past 3 days I am starting to see signs of swelling in my feet and hands. Not too bad yet but I can tell. AND My face…lordy! I feel like its blowing up. But at this point it might just be ‘me’ seeing the swelling in my face. BUT until the day my sisters and bro-in-laws tell me my nose is as big as Ashley’s (inside joke) then I will officially know the swelling is visible 😉

We definitely have some wild babies inside. They love to play ‘lets kick each other’ …. really. It is kinda funny. The other night, it was like 2 babies were having a “kick off”…you kick me, ill kick you harder…I laughed after the first 6 times in a row but then I was like “hey, hey, hey.. simmer down now!” Blayke has felt them move for the first time… I wish I would have recorded her reaction…mom fail…her face was priceless. Maybe I can get it on video another day. But she finally stayed still with her hand on my belly long enough to feel them, usually she is all about this & that and unless they kick right away, she is then over it quick, lol.

I had a prenatal massage today, which I was super excited about. BUT unfortunately it was just not all worth it. Lay this way, that way, pillow here, pillow there…it just was not relaxing. However, the massage itself was good…I just couldn’t ‘relax’. The whole time during the massage all I felt was how much ‘water weight’ was rolling around and just made me feel blubberish…thanks Ensure.

Hopefully I can sleep tonight…but more than likely its not gonna happen. On to another week…keep them coming little ones 🙂