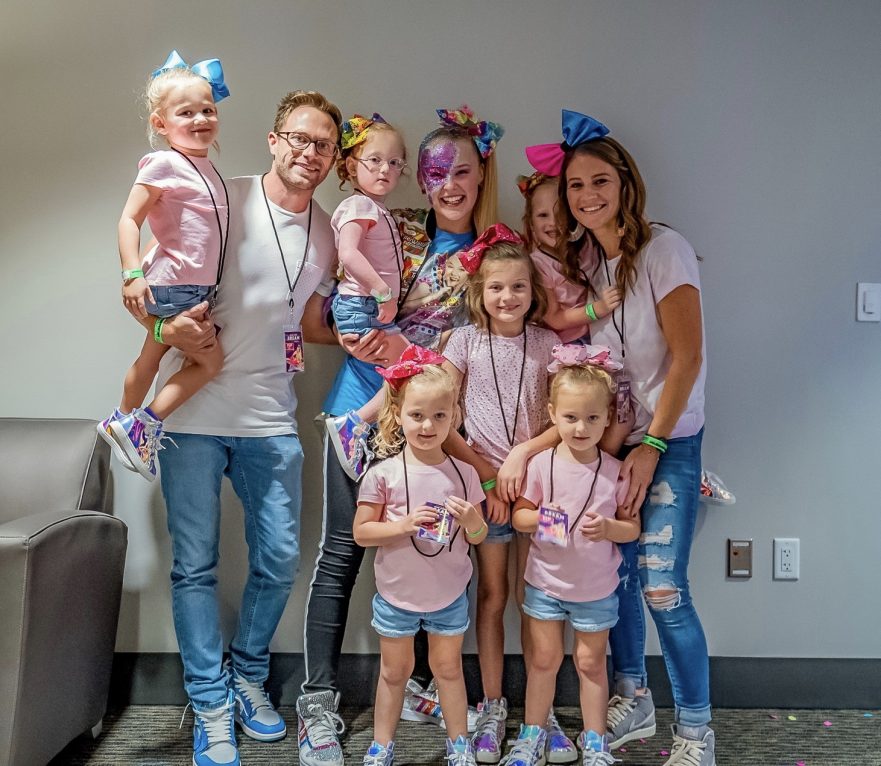 Blayke and the Quints have been obsessed with JoJo Siwa. When we saw that JoJo was coming to the Houston Area, Daddy said WE HAVE TO TAKE THEM! I was 100% excited to take Blayke to see JoJo but NOT gonna lie, taking five four-year olds to a concert…yikes! However, there was no way we could not NOT take them…they all love JoJo.

So the day came and ‘last minute Mommy’ tried her best to get them ‘Jojo dressed’. Buzz had already taken the girls to pick out their own JoJo bow (like we needed more bows in this all girl house, lol) and I ran around to Target and Walmart looking for shirts. I ended up with some pink sparkle shirts for the quints, a pink star shirt for Blayke and all the girls some super duper awesome hightop shoes…they are all OBSESSED with these new tennis shoes, and they are pretty awesome…wish they came in adult size, lol.

We get to the concert and it is packed. Adam got us some super close seats…like as close as you can get. I didn’t know how the girls would react because they get shy in new places / surrounds but on the other side of it…these girls are ALWAYS SINGING AND DANCING… ALL DAY LONG! so I was hoping they would break out their sweet moves…haha but they were in shock most the time that JoJo was actually REAL!! haha Blayke was giddy smiley the WHOLE TIME, and it lit up my world seeing her so happy and so excited…but the quints were like OOOOMMMGG…this is fun but what is going on, hahaha. AND.. MOMMY HERE!!! HAD A BLAST! Had my JoJo bow in, my hightop shoes and sang and danced my teeny-bopper heart out 🙂

They all had an absolute blast and will not stop talking about it. I told Adam afterwards… “‘I’m not sure how they will ever see another concert and not expect this”… because it was not the norm of a concert….they got overly spoiled from their Daddy (oops, lol).

Checkout our video from the super fun day!