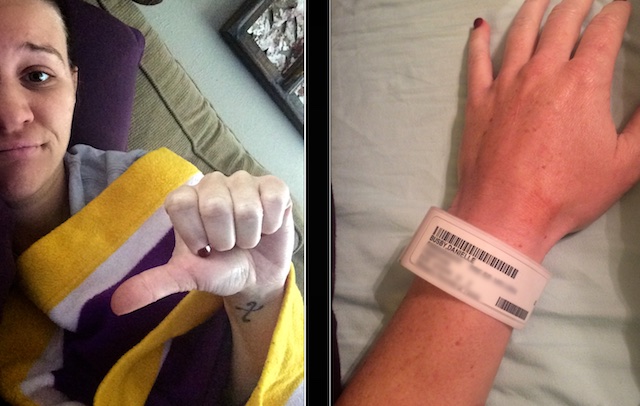 This week has been a bit of a “pain changer”. I am really starting to feel more and more uncomfortable..and I’m actually getting more ok with sitting on the couch (it’s so boring though, lol).

My Wednesday morning started off with the usual…wake up, eat breakfast, get Blayke dressed and take her to school. If you saw me that morning you would probably have thought “mannnnnnn, she doesn’t look good today” because…coming from the exact words from Blayke “Mommy…why you still in your pjs?? You can’t take me to school in your pjs silly“…..Well Mommy sure did take her to school in her pjs, LOL. (Poor Blayke…thank goodness she isn’t at the age where she can feel embarrassed by her mother, haha..or is she???). I decided to run to Smoothie King and get my fabulous “Quintuplet Hulk” smoothie and then headed home….and from this point I was glued to the couch.

As lunch time came around, I was watching The Chew (OMG!! love that show) and I figured I better fix something to eat..something  light…sandwich and some soup… because I wasn’t actually hungry after the 1100 calorie smoothie I finished drinking about an hour before…but I knew I had to feed these babies. About 30/40 minutes later…I started to feel so..SO UNCOMFORTABLE!!! I of course get indigestion all the time but it has actually gotten a lot better and only acts up really at night-time. THIS was something different!! I actually have NEVER EVER felt anything like this before. It of course was worrying me. I felt like I literally couldn’t breathe. Horrible pain on the left side and middle of my chest. I had SO much pressure… I just kept trying to breathe in and out..in and out…but if I tried breathing in through my nose…it was WORSE!!! I guess about 15 minutes went by and I’m thinking ‘ok…could this just be bad indigestion…if so..it will go away’… I was hoping that was the case…but NOPE! it was getting worse. I started feeling the pain in my upper back as I was trying to breathe. I don’t get freaked out or scared of too much but THIS…THIS was really scaring me. The second my eyes started watering and all I could do was grab my chest, I thought… DANG IT!!! I’m going to have to go to the hospital!!

Adam of course happen to be out-of-town for work…about 4 hours away. (Awesome…#sarcasm). BUT I had to call him even though he couldn’t literally do anything for me at the moment. (I hated calling him…I knew he would instantly feel stressed, scared, nervous…etc…BUT he is Baby Daddy..and my husband, lol..so he gets the first phone call, ha.).  So he called closest first two contacts – Ashley and Priscilla. Ashley was at work and P was at home…so P ran over to come get me.. P about broke down the front door when I didn’t answer at the first knock…sorry, had to potty… (“potty break” … just for you Katy, lol, and yes..I am using the hand movements too). I got to the door as quick as I could and we were off to urgent care / hospital..wherever I needed to go. I was trying everything possible not to have to go to the actual hospital so we stopped at the urgent care while I was waiting on my doctor to call me back. Well the urgent care…not gonna work…doctor called and wanted me to go to Woman’s ER. So as this point Ashley met us, and I jumped in her car and we took off to hospital….wait..let me reemphasize that…we TOOOOOOOOK OOOOOOOOFF to the hospital. That spiffy car can sure “GEAUX” 😉

Get to the ER… Ashley proceeds to tell them “She is pregnant with quints and having really bad chest pains”…. responses: “OH! you having 5 babies”, “There are 5 babies in there”, ” That was you on the news the other day!?” UMMM YES!!! Can we get to checking me out now, lol..wait..but I have to pee.. “potty break” .

Questions after questions as they begin to run routine test and take blood, do EKG, etc. Of course my blood pressure is really high and I can tell the babies are not liking this. They are all rolling around and going crazy inside. And this is totally making me more concerned….not liking this. ER Doctor comes in and after talking he decided I need to have a scan done to rule out any blood clot. (WHAT!!!!) Apparently with the signs I was showing…they needed to rule this out because especially being pregnant…with quints…my organs and getting a bit squished inside. So off it was to do a nuclear scan. 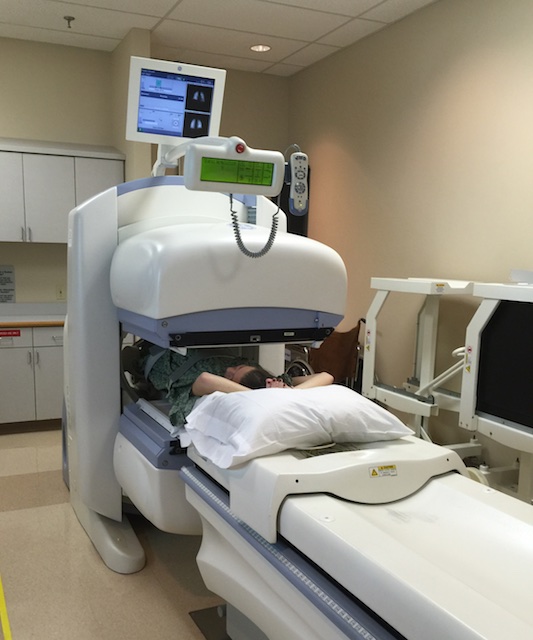 As the second part of the scan was going on ….. I had to be pulled out and sit up. OMG!! I instantly..INSTANTLY started sweating like crazy…I mean..like even from my finger nails..haha. I about ripped my “beautiful” hospital gown off, lol. The Tech was probably like “ooooohhhh…whats happening” (maybe excited…yea right…i’m preggo with quints!!) 10 minutes later…we proceeded to finish the scan. Back to the ER where all I could think about at this time was something to eat. BUT LUCKY ME… Kylie saved the day when she came to the hospital with Oreos! haha. (She knows me well!)

After the scans were reviewed and provided to the doctor, we were told there was NO BLOOD CLOT (Praise God). Most of this pain was coming from ….well… being pregnant with Quints. Like I mentioned earlier…everything is getting super squished inside and my organs are rising up into my chest which is causing pressure and can make it harder to breathe. I was able to go home and ‘take it easy’…no stress / anxiety …. and breathe. Relax.

I just knew something was wrong when all this pain was occuring… I mean..the pain was at a big fat 10! I have never felt like that before, ever! But as scary as this day was….it was so good to hear it was nothing major. Praise God!

Thank you to all who were praying for me and babies during this scare. I am so thankful it was not a blood clot.