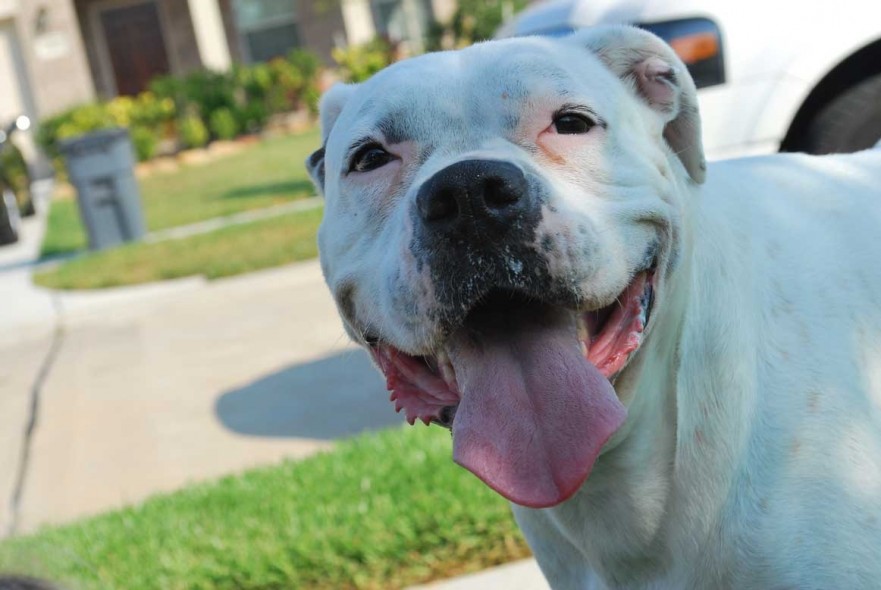 Monday was a day of surprises!…and NOT all good.

I went back to work on Monday after being ill sick for about 10 days. I was glad to actually get out of the house but the second I had to get up early, drive downtown and sit in a chair all day…I remembered how hard this was on my body. I was in a lot of pain and miserable at work.

Adam took Blayke to school that morning and then had to take Zoe (our 9-year-old sweet 70 lb. boxer) to the vet. Zoe went to the vet about 2 weeks prior for having a cough with minor blood spit-up. The vet said everything looked fine and it seemed she had a cold/cough and sometimes the random spats of blood is normal. So Zoe went home with 2 prescriptions. 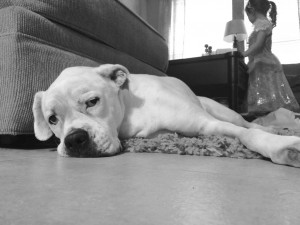 After a few days Zoe’s cough got better but she had no appetite (which is totally unheard of for our Zoe) and looked like she had lost a few pounds. I called the vet and he switched her medicine due to the antibiotic causing her appetite to go away.  She started to show signs of getting better but stayed really lazy. Over the past weekend, Zoe all of a sudden just did not want to get up at all and seemed like she was having a hard time breathing. It was clear as day SOMETHING more was wrong with her. My heart was breaking…this was not “our dog”.

Where was the waging nub tail anytime a person walked by her?  Where was that big nasty slobber tongue that wanted to lick you all the time?  Where was the excited whine noise she used to make when you tried to play with her?  Where was Blayke’s best friend that used to lay right beside her and let Blayke color on her, paint her nails, dress her up with necklaces??

What happened at the vet on Monday was a complete shock!  I knew something bigger was wrong with her but I had NO IDEA Adam would tell me the worst news ever. Zoe had cancer….cancer!  How?  Why?  For how long?  What?  This can’t be happening!   I am at work feeling miserable as it is and this news just made me want to ball up and cry my eyes out.  I wanted to leave work immediately but I couldn’t.   All I kept thinking about the rest of day on Monday was getting to the vet and seeing Zoe… and I knew Adam was having to take this horrible news by himself and I just wanted to be with him too.

When we got to the vet, I immediately start balling my eyes out.   The vet proceeds to tell us about Zoe and show us the x-rays. The x-ray showed there were cancer modules all over her lungs.  The vet decided to do more x-rays to see if he could find something more….and more there was.  There ended up being a HUGE cancerous tumor in her abdomen along with more cancer spread all over her organs..it was just EVERYWHERE!   We knew there was NO taking Zoe home…it was just too bad to even try medication and pain meds.  My poor Zo Zo…breaks my heart.   How long had she been in pain? How can she have gone down hill that fast? 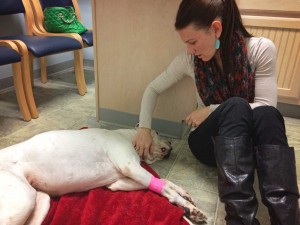 Zoe comes into the room and it was just the hardest thing to see. She could barely even wag her nub tail…but you could tell she was excited to see us.   Adam and I laid down on the floor with Zoe.. and just cried and cried. The unexpected surely did happen that day.  We said our last goodbyes to Zoe and both stayed in the room with her while the medicine was given to her.

We decided to not take Blayke with us at the vet to see Zoe, it was a hard decision but we thought it was for the best.  The next morning (Tuesday…my Birthday) I needed to take Blayke to school.  I was so nervous…what and how do we, I, tell Blayke.  When Blayke noticed Zoe was not here after calling and calling for Zoe to come in out of the back yard…this broke my heart…it was like she instantly knew Zoe was “gone”.   Blayke cried and cried as I held her…and explained to her the best I could about what happened.   I had no idea she would take it that hard.  Our sweet little princess….she loved that Zo Zo so much.

That day was one of the worst days that we have had at our house in a long time…  It’s so crazy how we become so attached to our pets.  Zoe was such a sweetheart and a gentle giant of a boxer.  She loved Blayke and was Blayke’s companion from the start.  We are sure going to miss her.

WE LOVE YOU Zo Zo!